Animal Crossing is one of those series without much middle ground; people are either really into it, or they struggle to see the appeal. I’ve been a fan of the weird little village simulators since the GameCube days, and have been looking forward to a fully realized new entry for years. New Horizons is almost here, and I got about 40 minutes of hands-on time with it, from the opening until the moment the Nintendo reps wrenched the controller from my hands. Here’s a small slice of what you can expect to see for yourself in about a month.

Animal Crossing: New Horizons starts off as you’re preparing to book your trip via Tom Nook’s Island getaway service. Timmy and Tommy Nook ask you for your name and birthday, and then have you pose for your passport photo. In a departure from past games, I’m then dropped into a simple character creator, where I’m able to pick my hair style and color, skin tone, and eye shape and color. The options are limited, but it’s nice to be able to choose exactly what I want instead of being surprised with how I look after answering a series of questions, as has been the case in the past.

Then I’m asked if I want to visit an island in North America or elsewhere. If you’re new to the series, Animal Crossing games are tied directly to your console’s date and time, with seasons that change according to the time of year. If you live in Australia, for example, your in-game island’s seasons will match what you’re experiencing outside. Regardless of your hemisphere, the next step is picking what island you’ll be visiting from four randomized selections. You can see the layouts of the rivers as well as where Tom Nook’s HQ will be. If you don’t like the selections, you can keep cycling through new ones until something strikes your fancy. I choose one with a winding river that doesn’t seem especially intrusive.

As a quick aside, the Direct showed off some of New Horizons’ terraforming elements. Don’t like the flow of a river? Put on your hard hat and change it. That ability, coupled with the option of building bridges and staircases, will let you transform your routes if you decide the layout isn’t to your liking anymore. You can also build a vaulting pole and ladder to cross gaps and scurry up cliffs if you don’t want to make any permanent changes to your layout.

All right, back to my game. There are a few more jokey bits of dialogue to go through, and then I’m off. The screen goes black, and I hear then whirring of a propeller and some in-flight announcements. In a nice little touch, the warbly little animal sounds have an added layer of static to better emulate the kind of audio you hear on a plane’s overhead speaker system. The charter company, Dodo Airlines, is run by a pair of bird brothers (Orville and Wilbur, naturally), and their offices later serve as a place to access multiplayer and send letters. You can also depart on mini adventures to random islands to find and collect items.

After landing, I watch a brief orientation video with clips of villagers and animals going about their day doing typical Animal Crossing things. The level of detail is phenomenal, and everything looks great. Characters have the same general art design and style, but they’re brimming with little visual flourishes. My animal companions (chosen randomly from a large roster of critters) are Mac the dog and a bunny named Mira. They’re not exactly furry, but they have a pseudo-flocked texture on them, giving them the appearance of looking like living toys. Bugs like cicadas and bees have iridescent wings, though they’re not likely to stick around long enough for you to admire them. 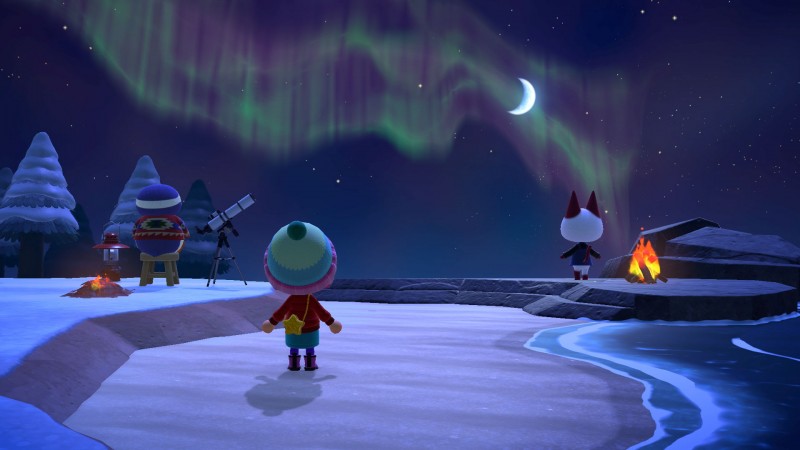 Since we’re on a deserted island, the first order of business is to claim our site. Tom Nook has already staked his claim for his Resident Services tent, but everything else is fair game. I start wandering around, looking for the perfect place to pitch my tent. I find a great spot a bit north, between a pair of orange trees and overlooking a waterfall. What could be better than falling asleep with nature’s own white-noise generator? I try to plop my tent down, and I’m told it’s a little too close to the water. After backing up a few steps, I’m able to set down what will be my new home. Don’t worry; if you regret where you’ve set up camp, you can move it later. As with a lot of things in New Horizons, Nintendo is aiming to eliminate the pain points from past games.

Before heading back to Nook, I decide to do a little exploration. There’s not a lot to see in these early days, but since it’s winter I’m able to shake trees without having to worry about getting stung by bees. As I run, arms stretched behind me, the sounds of my footsteps are muted in the snow. I see a few snowballs – perfect for rolling into snowmen. In the rivers, I spy a few shadowy fishy figures. They disappear in a flash as I zoom past to report my success to Mr. Nook.

Tom is impressed with how quickly I’ve set up, so he tells me to help my fellow campers. I find Mira a ways south, and she’s struggling to find the perfect spot. She says that she threw a stick and was determined to set up wherever it landed, but now she’s not so sure. I tell her it’s a perfect location, and she feels better about the situation. A few moments later, she’s got a place to call home. Mac is similarly stuck. I tell him I’ve got the perfect place, and he enthusiastically goes along with my plan. I run back to my tent, and try to put his tent as close to mine as possible. Hey, I like having neighbors, and Mac is a cool guy. Unfortunately, I’m told that our tents must have a little more real estate between them. So much for that plan. I manage to have him fairly close, but it’s not the tent-to-tent setup I was hoping for. 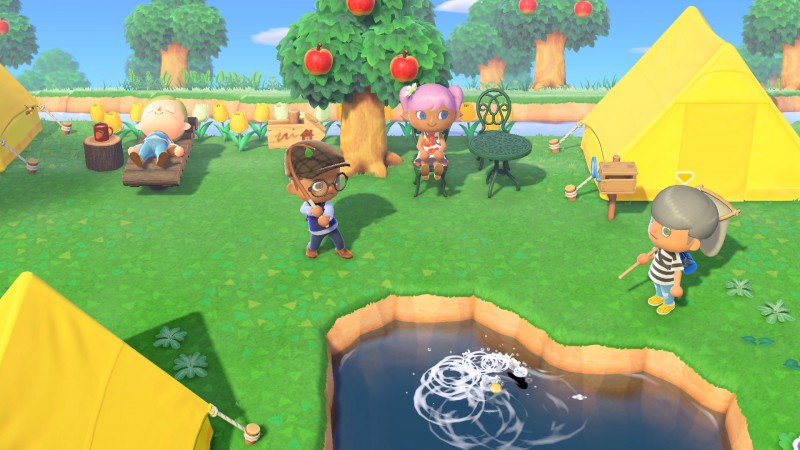 The island seems to have ample room for growth, which is key. In addition to serving as home to all the various animals and services that will move in over time, it must sustain multiple players. Up to eight players can live on an island, with one character (and home) for each registered user. Online, eight players can inhabit an island simultaneously. If you want to play locally, up to four can play together, with one player serving as leader and determining where the screen scrolls. I didn’t get to play that mode, but looking at the Direct it seemed like a serviceable (if cramped) way to play together. Items that the followers find will be deposited in the recycle bin for the host to collect later.

I have to run a few more errands for Tom Nook, including gathering wood for a bonfire and fruit for a party. I can’t spoil what happens at the party, but it’s funny and heartwarming in the familiar Animal Crossing ways.

Reality sets in when I wake up. Tom swings by my tent and gives me a NookPhone, which is a fancy new piece of tech. He says it’s easy to use, because he removed most of the features. He also brings up the matter of payment, which is something I’d been waiting for. All told, I’m indebted to him to the tune of 49,800 bells. Things are different in New Horizons, thanks in no small part to the NookPhone. Rather than pay solely in cash, I’ll be able to work off my debt using a new mileage program he’s cooked up. The scheme is actually pretty cool: You earn “Nook Miles” by completing in-game tasks you’d likely be doing naturally. Things like picking up shells, talking to neighbors, snapping photos, catching fish and bugs, and planting flowers all earn you miles. In addition to paying off your debt, you can use those miles to pick up cosmetic items for your character. These tasks have different tiers, too, and I scrolled past tons of empty slots. It looks like there’s going to be plenty to do, and now you’ll actually get rewarded for doing it. 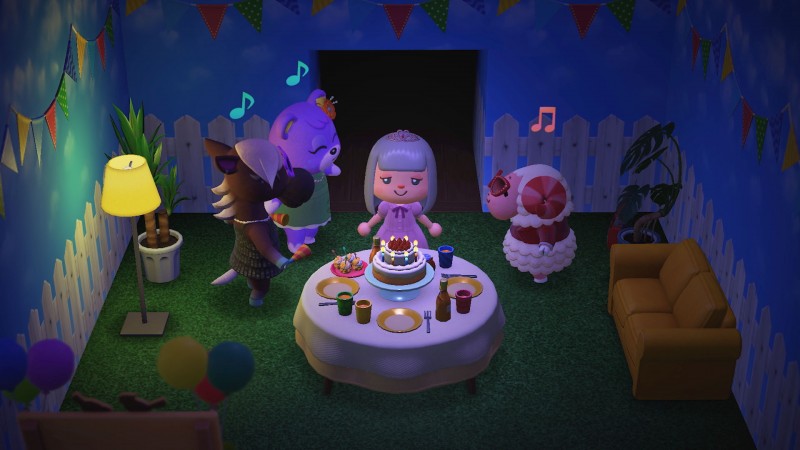 In the Direct, we saw permanent structures such as the museum and the Able Sisters moving to the island, as well as an actual player home that replaces the tent. Though the first debt can be paid off with miles, that doesn’t necessarily make bells an obsolete currency; further upgrades down the road might require bells, but I didn’t play long enough to test that theory. Either way, the mileage program seems designed as a way to acclimate players to the various activities and steer them toward the big beats.

My first mileage-earning opportunity comes when I use the new DIY workshop for the first time. Crafting appears to be a big part of the game now. Before, you could design patterns for use as flags and clothing. Now, you’re making things like furniture and tools. As you get new recipe cards, you can make more sophisticated items and even further customize things you already know how to make.

Nook gives me the recipe for a flimsy fishing pole and tells me to gather the materials to craft it. In this case, it’s several sticks. It’s flimsy, after all. After clicking into the workshop, I’ve got my own fishing pole. Not too bad! Well, sort of. In what’s bound to be a controversial move, New Horizons’ tools break over time – and not just the ax, as has been the case in previous entries. I don’t have a sense of how long they last, but the “flimsy” part doesn’t exactly fill me with confidence. This is a case where it could be much ado about nothing for some players and a real issue with others, the way the weapons in Breath of the Wild polarized Zelda players.

Will larger fish wear out poles faster? Do failed attempts carry an additional ding to the pole’s overall durability? Again, it’s too early to know from this short demo, but I’m definitely curious, and more than a little apprehensive about how it all works. All I know is my fishing pole was strong enough to let me catch a horse mackerel from the ocean, which I proudly displayed in my tent next to my lantern, radio, and camo-patterned cot. 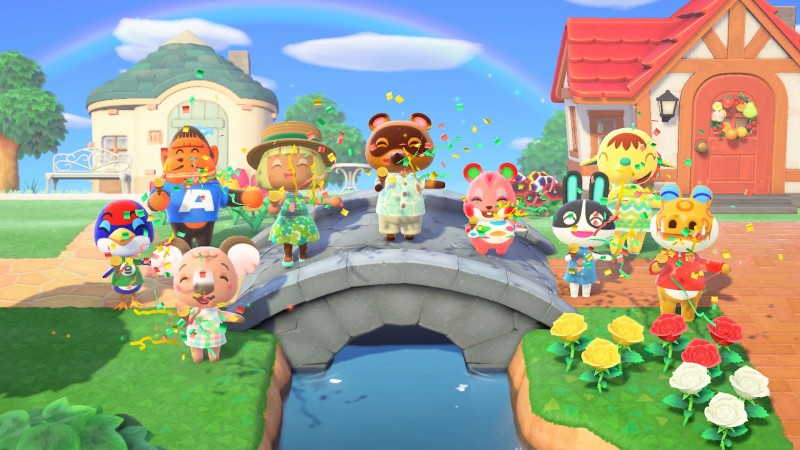 And with that, my demo ended. Animal Crossing is a tough game to appreciate in such a short session, but I can already feel myself getting drawn into its laid-back loops. These games are meant to be savored over long periods of time, when you’re able to get to know the animal residents and make your own place in the world. Mac and Mira were very kind (Mac gave me a nice denim cap, and Mira passed along a recipe for turning weeds into an umbrella), but it was a brief introduction. Hopefully, I’ll see them again someday. Maybe I’ll run into them on Bunny Day in April, which is the game’s first post-launch festival?

Animal Crossing: New Horizons is coming to the Nintendo Switch on March 20.

Gears Vs. XCOM: A Tactical Comparison

Streets of Rage 4 Review — Return To The Old-School Neighborhood

Super Mega Baseball 3 Review – Its Own Brand Of…